In this UEN Weekly Report from the 2021 Legislative Session, find information about:

Budget Bills Status in Both Chambers

The IALNS Newsletter reported the progress of budget bills required to be completed before the end of the 2021 Session. See the April 15 weekly report for details of HF 868 Education Appropriations, which has been on the Senate Calendar without further action since Aug. 26. As budget bills progress, the close of the 2021 Session is within sight. Daily per diem for legislators ends on April 30, which is the 100th day of the Session. Both the House and Senate adjourned without action early Thursday morning, indicating that agreement among the House and Senate Leaders and the Governor has not yet been reached.

SF 615 Standing Appropriations: this bill appropriates a total of $3.411 billion for State Foundation School Aid, which is an increase of $21.5 million compared to FY 2021. That total is well below the $53 million announced by Republican Leaders early in the Session and even further below the $95 million annual average increase of state resources for public education over the last decade. Within the appropriations to the DE, the following are reductions compared to current law, for a total reduction of $32.5 million for the three items combined (all of these are continued from the prior year):

The Bill was approved in the Senate Appropriations Committee on April 27, moving it to the Senate Calendar. UEN is registered as undecided on this bill.

The Iowa Legislative News Service charts the progress on appropriations bills. Only one, the Administrative and Regulation Appropriations bill, has been approved in both chambers, sending it to the Governor. The other 10 budget bills await action in either chamber. Here is the status as of Thursday: 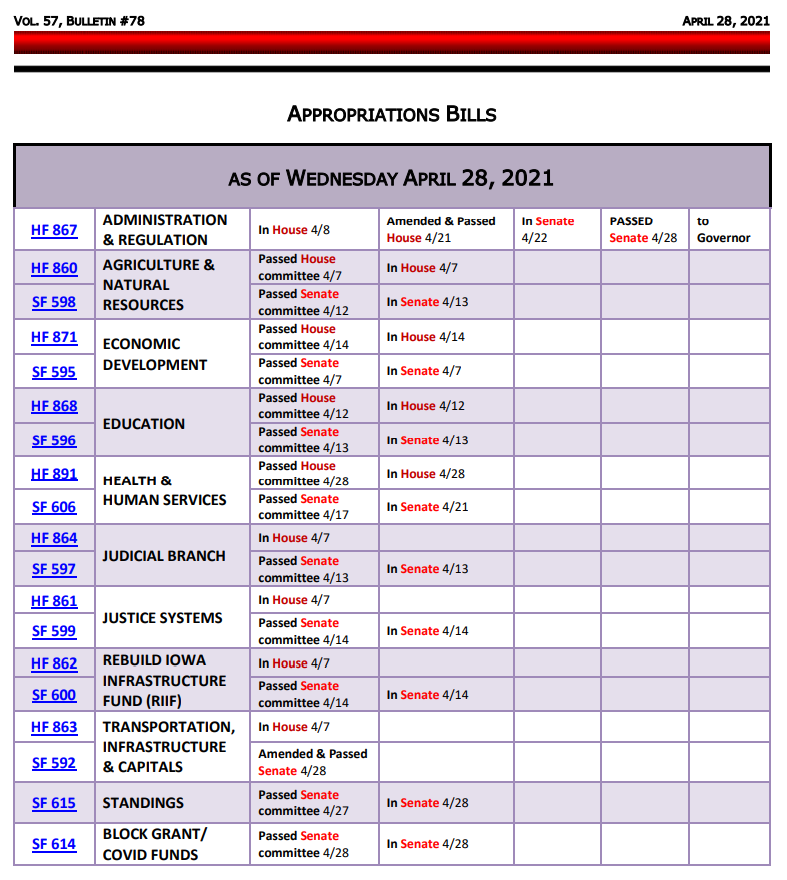 Picking up Pace at the Statehouse: Some Big Policy Bills Move

HF 847 Education Practices and Flexibility: this bill contains several provisions from the Governor’s school choice policy, but now, some other ideas from the legislature have been included. The bill was amended as approved in the Senate on April 28. Here are details (amendment details in italics):

The Senate approved the bill Wednesday, 42:6, sending it back to the House. UEN is still registered as undecided.

HF 813 Charter Schools: the bill was approved without amendment (although the Senate Democrats offered 13 amendments, all were rejected or ruled not germane), sending the bill to the Governor. Here’s a brief summary of the bill’s actions.

The bill was approved without amendment, 30:18 on April 28, sending it to the Governor. UEN is registered in opposition.

HF 802 Diversity Training and Curriculum Limitations: the bill from the House originally included limitations regarding divisive subjects, racism and implicit bias. The Senate amended the bill, which rewords significantly (instead of divisive concepts, it’s “specifically defined” concepts) and there’s a list of 10 of them followed by the definitions of race and sex stereotyping directly from the bill language:

(7) That an individual, by virtue of the individual’s race or sex, bears responsibility for actions committed in the past by other members of the same race or sex.

The Senate approved the amendment and the bill, 30:18, returning it to the House. UEN is registered as undecided. We appreciate the work in the Senate to improve the bill.

Other Bills on the Move

HF 602 General Fund Transfer to Student Activity Fund: this bill allows the school board by board resolution to transfer from the general fund to the student activity fund an amount necessary, as recommended by the superintendent, to fund co-curricular or extracurricular activities for which moneys from student-related activities such as admissions, activity fees, student dues, student fund-raising events, or other student-related co-curricular or extracurricular activities fail to meet the financial needs of the activity as the result of restrictions placed on the activity related to the COVID-19 pandemic. The bill is retroactive to the budget year beginning July 1, 2020 and effective through June 30, 2023. This subsection is repealed July 1, 2023. The bill was approved 48:0 in the Senate (April 28) sending it to the Governor. UEN is registered in support.

HF 744 Protecting Free Speech: this bill was amended in the Senate to include provisions regarding staff in charge of school newspapers and protecting student free speech, sending it back to the House. The House concurred in the Senate Amendment, sending it to the Governor. UEN is registered as undecided.

HF 848 Broadband Grants: this bill sets up the policy for expansion of high-speed Internet services throughout the state and contains the following provisions:

SF 546 Home Schooling Matters: this bill primarily deals with home school requirements but does have some cross over in drivers’ education that impacts public school students. The bill does the following:

HF 201 Sex Offender Registry: this bill requires a sex offender who is required to register in another jurisdiction to register in Iowa while employed in Iowa or attending school in Iowa. It requires a person convicted of extortion to register as a Tier III sex offender if the court determines that the offense was sexually motivated. The House passed the bill 88-0 (Feb. 2). The Senate passed the bill 47-0 (April 28), sending it to the Governor. UEN did not register on this bill.

Education Bills Still Pending: In addition to passing a budget, consensus on tax policy changes and other heavy lifts still on the statehouse agenda are pending. Here are a few education bills we are still watching:

HF 532 Qualified Instructional Supplement and PK Authority: Ask Senators to support the Appropriations Committee Amendment to HF 532 in the Senate and approve the bill, sending it back to the House. Since this $27 million is allocated to districts based on enrollment served, it’s a good balance to the federal funds distribution formula based on poverty. Without the PK provisions, schools are effectively reduced by $7 million in preschool funding due to a drop in 4-year-old preschool enrollment due to COVID-19. We fully expect a regular number of preschools in the fall of 2021.

Gratitude: Pick one bill sent to the Governor that will help your district, and tell your legislators
THANK YOU for getting that done.

Connecting with Legislators: Start thinking now about building legislative relationships during the Interim, connecting with legislators at home. See the UEN Advocacy Handbook linked here for suggested advocacy actions based on the normal legislative cycle. Find the handbook on the members-only section of the UEN website. Contact Jen Albers for log in credentials if you are new to the website. Jen@iowaschoolfinance.com

Find biographical information about legislators gleaned from their election websites on the ISFIS site here: http://www.iowaschoolfinance.com/legislative_bios Learn about your new representatives and senators or find out something you don’t know about incumbents.

Find out who your legislators are through the interactive map or address search posted on the Legislative Website here: https://www.legis.iowa.gov/legislators/find

Check out the UEN Website at www.uen-ia.org to find Advocacy Resources such as Issue Briefs, UEN Weekly Legislative Reports and video updates, UEN Calls to Action when immediate advocacy action is required, testimony presented to the State Board of Education, the DE or any legislative committee or public hearing, and links to fiscal information that may inform your work. The latest legislative actions from the statehouse will be posted at: www.uen-ia.org/blogs-list. See the UEN Advocacy Handbook linked here, which is also available from the subscriber section of the UEN website

Thanks to our UEN Corporate Sponsors:

Special thank you to your UEN Corporate Sponsors for their support of UEN programs and services. You can find information about how these organizations may help your district on the Corporate Sponsor page of the UEN website at https://www.uen-ia.org/uen-sponsors.

Contact us with any questions, feedback or suggestions to better prepare your advocacy work: